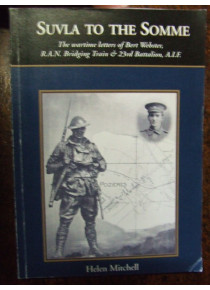 This war book is a record of service of two Australian cousins both destined to die in WW1.
In 1911 Bert Webster, a Victorian by birth, joined the Royal Naval Rserve. By November 1914 he was Acting Petty Officer on HMAS Cerberus. In March 1915 Bert transferred to the newly formed 1st Royal Australian Naval Bridging Train similar to being Naval Engineers. They landed at Suvla north of Anzac Cove during the August Offensives in 1915. After the Gallipoli evacuation the RANBT was disbanded at which time Bert Webster transferred the 23rd Battalion AIF. He went with the Battalion to the Western Front. Bert was killed on the night of the 28th July 1916 while in the trenches at Pozieres.