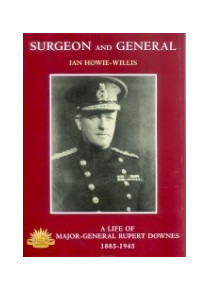 The son of an Army officer, Downes joined the Army as a trumpeter while he was still at school. He was commissioned as a Captain in the Australian Army Medical Corps in 1908, and joined the First Australian Imperial Force (AIF) in 1914 as its youngest Lieutenant Colonel.

He landed at ANZAC with the 3rd Light Horse Field Ambulance Unit serving throughout the Gallipoli campaign.
Downes had a low respect for the 3rd Light Horse Brigade CO Colonel G.F. Hughes and its Brigade Major Lieut. Colonel J.M.Antill. Both men are largely blamed for the disaster of the Charge at The NEK. Downes wrote to his Father,"About Colonel Hughes it is a most glaring crime and mistake to put him in command of even a Corporal's picquet; he would hopelessly muddle that."

After the evacuation in 1916, he was appointed Assistant Director of Medical Services (ADMS) of the newly formed Anzac Mounted / Light Horse Division

In 1917, he became Deputy Director of Medical Services (DDMS) of the Desert Mounted Corps. After the war, he wrote articles on medical aspects of the Sinai and Palestine Campaign, and the section on the campaign for the official history.

During WWII he was appointed the Official medical Historian on the 5th March 1945 he had travelled to Cairns with the Army Medical corps when the plane crashed into the sea. There were no survivours Downes died age 60 years.

This History would be interesting for anyone researching the Light Horse Field Ambulance / Medical Units or to read more about the life, times and conditions surrounding the Anzac Girls.