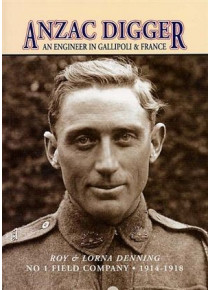 Australian Sapper with the No. 1 Field Company, Engineers AIF

Anzac Digger: An Engineer in Gallipoli and France﻿ by R.Denning & L.Denning - new book

This book is the war record of Roy Denning an Australian soldier of WW1.

He was a  sapper who went to Gallipoli with the Australian No. 1 Field Company, Engineers AIF. He was an articulate man and he has left us with a very introspective view of World War One.

In very vivid words, the book tells us how he felt to be in action amongst the death, maiming and being part of the terrible life in the trenches.

After the Gallipoli evacuation he arrived on the Western Front where the horrors of war were even worse and the living conditions were extremely primitive. Again he tells how it really felt to be in the front line at Pozieres, Ypres, Longueval, The Somme, Villers Brettonneux and other battle areas. He describes the ghastliness of digging trenches and having to decided between chopping through buried bodies or diverting the trench to go around them.

In one incident, his men who had been the subject of shelling without the chance to retaliate, were suddenly in action and the 'blood-lust' of revenge gripped them.

When he went on leave to England, he began questioning his own resolve to return to the war. Self-discipline and loyalty to his mates stopped him going AWL and he returned to face more misery.

Denning survived the war, and for years wrote and re-wrote his diary﻿.