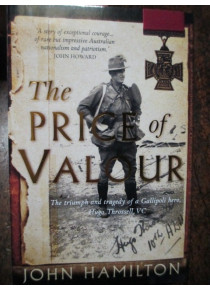 The Price of Valour The Triumph and Tragedy of a Gallipoli Hero, Hugo Throssell, VC By John Hamilton : new book

This war book is about the military and civil Life of Hugo Throssell VC 10th Light Horse. He had inspiring military life during the WWI being a recipent of the Victoria Cross Medal. After the war his life had changed which caused a tragic ending for an Australian Hero.

In 1914, he joined the 10th Light Horse Regiment, Australian Imperial Force. His brother, Ric, also served in the war and died near Gaza. Hugo Throssell named his son after him.

He landed with the Regiment onto Gallipoli on the 4th August 1915, he was a Second Lieutenant.  He saw action in the desperate Charge of the Nek.

According to the Australian Dictionary of Biography: "This experience increased his eagerness to prove himself in battle. He wanted to avenge the 10th L.H.R. which, like so many of the Anzac troops, was battle-worn, sick and depleted. His chance came later that month at Hill 60 during a postponed attempt by British and Anzac troops to widen the strip of foreshore between the two bridgeheads at Anzac and Suvla by capturing the hills near Anafarta. Hill 60, a low knoll, lay about half a mile (0.8 km) from the beach.

On 29–30 August 1915 at Kaiakij Aghala (Hill 60), Gallipoli, Turkey, Second Lieutenant Throssell, although severely wounded in several places, refused to leave his post during a counter-attack or to obtain medical assistance until all danger was passed, when he had his wounds dressed and returned to the firing line until ordered out of action by the Medical Officer. By his personal courage and example he kept up the spirits of his party and was largely instrumental in saving the situation at a critical period.

Whilst recuperating from his wounds in London he was introduced to Katharine Susannah Prichard, who later became a famous Australian author and socialist.

He eventually returned to active service, rejoining the 10th Light Horse in the Middle East where he fought in a number of engagements, and achieved the rank of Captain.

He returned home in 1918 and in 1919 married Prichard. In the following years, Hugo become an outspoken opponent of war, and claimed that the suffering he had seen had made him a socialist. His stance on the futility of war outraged many people, especially as they were coming from a national war hero and the son of a respected and conservative former premier. His very public political opinions badly damaged his employment prospects, and he fell deeply into financial debt.

On 13 November 1933, he killed himself (while his wife was away on a trip to the Soviet Union). - his youth and future forever darkened by the triumph and tragedy of war.

John Hamilton has written an extraordinary account of Throssell's life: winner of the Victoria Cross, due to his bravery on Gallipoli; husband to novelist and committed socialist Katharine Susannah Pritchard; and fallen hero, thanks to his public denunciation of the war. The Price of Valour details the battles in Gallipoli and Palestine, and a provides a compassionate and intimate portrait of a real Australian hero.