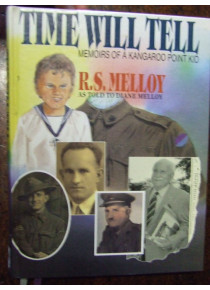 Time Will Tell memoirs of a Kangaroo Point Kid by R.S.Melloy. : new book

Interesting soldier and a detailed work. Robert Melloy was a member of the 1st AIF 42nd Battalion follows his wartime record with the 42nd Battalion AIF. Not just his wartime story but his life's story before and after. WW1 service remained a huge influence in his life and it is interesting to read the life's record of one of our AIF boys .
Melloy's  WWI record with the 42nd Btn takes up 18 Chapters of the book.

He also served during WW2. He remained a huge supporter of 42nd veterans association. Certainly sad times in the early 80's as the association membership decreased. Many Photos of RSM with members of the Battalion.