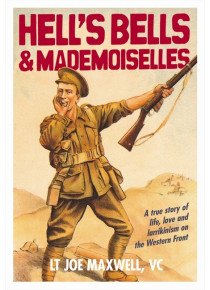 Joe Maxwell was Australia's second most decorated soldier of World War One.  His recognised gallantry only being surpassed by 'Mad Harry' Murray of the 13th Battalion. Maxwell was from NSW where in February 1915 he enlisted for service with the AIF. Maxwell said his main reason for joining was the pay.

Hells Bells and Mademoiselles is the eyewitness account of the role of 18th Battalion AIF in the WWI by Joe Maxwell.

After Gallipoli he was transferred with the 18th Battalion to the Western Front. In just twelve months during 1917-1918 he was commissioned in the field, awarded the DCM, Military Cross and Bar, and VC. He was definitely a Aussie Larrakin during the same period he had time to be at a London party where the Military Police had to call for back up when they confronted Maxwell's group. Maxwell was fined a massive 20 Pounds.

On 3 October 1918, Maxwell and the 18th Battalion were taking part in its last battle of the First World War. They were trying to breach the Hindenburg Line close to Beaurevoir and Montbrehain. While taking part in this battle, Maxwell was a member of the attacking party along the Beaurevoir-Fonsomme line when he performed the acts for which he was awarded the Victoria Cross

This colourful memoir is a unique record of life as a World War One digger: Joe was in many of the major battles of the Western Front and graphically describes the action he saw, as well as the notorious larrikinism -and romantic adventures-of the off-duty diggers.

With a new Afterword detailing Maxwell′s life after repatriation back to Australia, this is an edition to be treasured.

Long out of print this is your chance to secure a copy of this famous digger account.
﻿