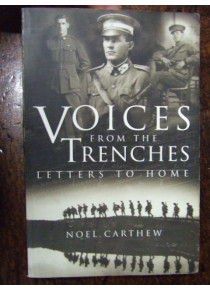 10th Lighthorse Voices from the Trenches Charge of The Nek

Voices from the Trenches Letters To Home ' By N. Carthew : new book

Voices from the Trenches Letters To Home ' By N. Carthew.

As 1914 drew to a close, little did anyone in Australia know that four years of warfare lay ahead. Mothers could not foresee the anguish they would suffer, nor wives and sweethearts their heartbreak. Young men, bronzed and debonair, had little idea of the grim reality of war as they marched off to do their patriotic duty for King and Country.

Among these young men were three brothers: Charles, Fred and James Carthew. This is their story, told through the letters they wrote from Gallipoli, North Africa, Palestine and the Western Front to their mother and sisters back home in Victoria. Vivid and compelling, their letters tell the true story of war - not the dusty facts and figures of the history books, but the very real emotions of hope and fear, love and longing, life and death. To read these letters is to live, a little, the life of an Anzac Digger, deep in muddy trenches and bloody battlefields, and to share the lonely, empty days endured by the women waiting at home; longing for the familiar scrawl of a letter and dreading the bleak anonymity of an official telegram.

The Carthew brothers participated in some of history's most legendary battles, but theirs is more than a story of guns and bullets - it is also a love story; of the love and devotion of three brothers for their womenfolk and their country; of the affection and loyalty between a young officer and his men. Above all, it is a tribute to the steadfast mateship of over 300,000 young Anzacs who fought, and sometimes died for each other, in the Great War of 1914-1918. It is a story that all Australians should carry in their hearts.
CHARLES: Served was an Officer in the 8th Light Horse. He was killed in the Charge at the Nek 7/8/1915
FRED: Served in was a Signaller in the 10th Light Horse later Camel Corps. Survived the war.
JAMES: Served as a Gunner in various Aust. Field Battery on the Western Front. He was wounded twice and was awarded the Military Medal for Gallantry in the Field in 1917. He survived the war.