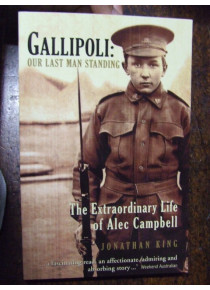 Landing on the beach at Gallipoli, aged 16, Alec Campbell looked no more than 12-years-old in his big brother's uniform. He was a young Australian caught up in a war that he knew very little about and in a country that he couldn't spell.

For three months, Private Campbell carried water through the trenches above Anzac Cove avoiding snipers and crossfire. 'The kid soldier,' as he had become known, eventually succumbed to enteric fever and was evacuated to Cairo for a six-month stint in hospital. His sense of national spirit, however, did not end at Gallipoli.

On returning home, he took on a larrikin life jackarooing, building boats and as a builder in Australia's new capital. His patriotism and love for others transported him from the bush to the Australian Workers Union, where he stood for elections in the local council before working for the Department of Labour to help repatriate World War II veterans. He also worked tirelessly for the Heart Foundation until he was 80-years-old. Alec Campbell epitomises the Aussie larrikin as well as the reluctant hero.

He was the knockabout boy who entered the war for adventure and ended his life as a national treasure.﻿