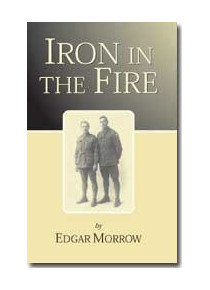 ' Iron in the Fire ' by Edgar Morrow. Morrow served with the
28th Battalion A.I.F. during World War One. He joined the Battalion as a Private
on the 3/5/1915 and fought for three months in the Gallipoli campaign until he
was evacuated with dysentry. He then went to France with the Battalion where he
was promoted to the rank of Corporal . He took part in and survived the Pozieres
Battle only to be wounded four days out of the Pozieres Line. Surprisely, he was
wounded in the shoulder by an airplane bullet while out of the line. He was wounded
in the arm a second time at Lagnicourt . He was in the heat of battle just after
shooting a German Machine Gunner when he was hit. Based on Morrow's diary and
letters back home. It is mainly regarding Morrow's Western Front experiences.
First published in 1934, it's one of the few literary works from Western Australian
authors of their experiences during the War and is considered among the best from
an Australian writing about that great conflict. It certainly found success among
the returned diggers. It was said to be one of the most interesting of the Australian
written War Books which by 1934 included Red Dust The Desert Column Hell's Bells
and Mademoiselles Jacka's Mob and The Gallant Company .  This book is a professionally
produced reprint of that history. Good one for medal or geneology research !
After the war Marrow joined the WA Police in 1920 and his service took him to many remote parts of the State. In 1937 The Law Provides, an account of his adventurous career in the North West and Kimberley, was published. He also wrote several plays for the ABC and was a contributor to The Diggers Diary page of the old Western Mail using the pseudonym of "E 28".
In 1925 he married Mary Forrest and of their five children, Harry, Margaret, Bevan,
Forrest and Ann, two, Harry and Forrest, served in the WA Police Force. He died
in 1953 while still a serving member of the Police Force.