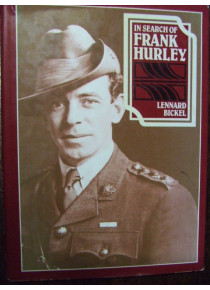 In Search of Frank Hurley' by L. Bickel : used book

'In Search of Frank Hurley' by L. Bickel. Life Biography of Frank Hurley. In 1917, Hurley joined the Australian Imperial Force (AIF) as an honorary Captain and captured many stunning battlefield scenes during the Third Battle of Ypres. In keeping with his adventurous spirit, he took considerable risks to photograph his subjects, also producing many rare colour photographs of the conflict. His period with the AIF ended in March 1918. Hurley also served as a war photographer during World War II.