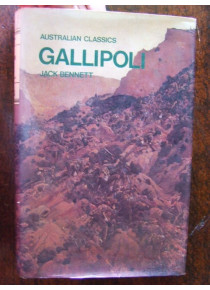 Written in chronological time span of the war. On the morning of August 6th 1915 the famous Australian attack at The NEK took place. Many of the men of the 8th and 10th Light Horse were only boys fired with loyalty for a nation itself not yet 15 years old. This is the story of two of those boys.
This book really become a classic when a screen play was made into the now famous movie of the same name starring Mel Gibson - as per usual there is a lot more detail to the book. This is also the hard cover version featuring Lambert's painting Anzac, the landing on the dust cover. Published by Angus and Robertson Sydney.