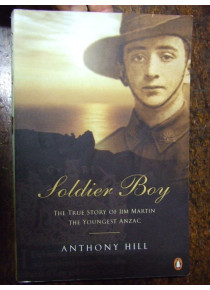 SOLDIER BOY -YOUNGEST ANZAC ". by A. Hill . James Martin enlisted with the 21st Battalion on 12/4/1915 his enlistment number being 1553. On 28 June 1915, young James Martin sailed from Melbourne on the troopship Berrima - bound, ultimately, for Gallipoli. He was just fourteen years old. Soldier Boy is Jim's extraordinary story of how an inexperienced and enthusiastic school boy became Australia's youngest known Anzac. Four months after leaving his home country he would be numbered among the dead, just one of so many soldier boys who traveled halfway around the world for the chance of adventure. This is, however, just as much the story of Jim's mother, Amelia Martin. It is the heartbreaking tale of the mother who had to let him go, of his family who lost a son, a brother, an uncle, a friend. It is about Amelia's boy who, like so many other, just wanted to be in on the action.
He was not lucky enough to suffer a swift bullet wound. On the 24/10/1915 he died on a hospital ship after the agony of enteritis, inflammation of the small intestine, gastritis.
lest we forget
click to read more about our young Gallipoli Hero