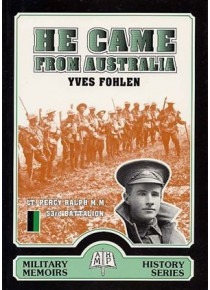 LAST NEW BOOK - ONLY ONE LEFT

This military book is written by a Frenchmen Yves Fohlen. Historically the book outlines  the operations of the 53rd Battalion in the last years of the war. But is primarily the story of Lieutenant Percy Ralph MM. Awarded the Military Medal for gallantry at the Battle of Polygon Wood he single handed attacked a german machine gun crew bayoneting all three of the gunners.  A hero no doubt, he was also mentioned in despatches for courageous duty in the field.  He fought with the AIF on the Western Front from 1917 to 1918. Such gallantry is made by taking enormous risk. On the 30th September 1918 at the battle of Bellicourt while leading his men Ralph was killed by a machine gun.

Yves Fohlen lives near where Percy fought and died. A moving account of the horrors of northern France..﻿