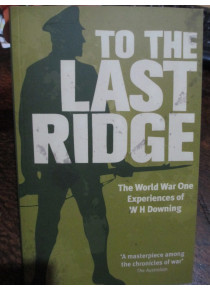 To The Last Ridge - 57th Battalion Digger. Battle of Fromelles.

This war book To The Last Ridge ' by W. H. Downing (Aust Veteran of Fromelles) reads like a history of the 57th Battalion AIF WW1.

This is the printed record of the remarkable war experiences of 4473 Walter Hubert Downing MM 57th Battalion AIF. A moving account which recalls in an honest and personal way Downing's experience of one of the most horrific series of battles ever fought. Downing describes the mud, life with the rats and the deaths of mates falling around him. During WW1, Downing was also awarded the Military Medal for bravery at Polygon Wood . This is a high detailed story of life on the Western Front with the 57th Battalion. First printed in 1920 it was acclaimed at that time for literary quality and its realism. Excellent for 'life and times' genealogy research. The 57th took part in action which took place on the 19th July 1916 which is now called the Battle of Fromelles .

The worst 24 hours in Australian history occurred 100+ years ago at Fromelles. Not just the worst in Australian military history, the worst 24 hours in Australia's entire history. The Australians suffered 5,533 casualties in one night - 1917 men were killed on the battlefield. The Australian toll at Fromelles was equivalent to the total Australian casualties in the Boer War, Korean War and Vietnam War put together. It was a staggering disaster. The 57th escaped the disaster initially as they were held in the support trenches. But other 5th Division Battalions suffered the greatest loss of Australian lives in one day.

The 59th and 60th, were practically wiped out.
W.H. "Jimmy" Downing (passage taken from this book) recorded his impressions: Stammering scores of German machine-guns spluttered violently, drowning the noise of the cannonade. The air was thick with bullets, swishing in a flat criss-crossed lattice of death ... Hundreds were mown down in the flicker of an eyelid, like great rows of teeth knocked from a comb ... Men were cut in two by streams of bullets [that] swept like whirling knives ... It was the charge of the Light Brigade once more, but more terrible, more hopeless.

Their commander Brigadier General Harold "Pompey" Elliott was said to have cried when he heard of the Brigade's demise.

In later life W.H. "Jimmy" Downing would become a legal partner of Harold "Pompey" Elliott. Many men would later die of wounds or war related mental anguish. One of these men was Harold "Pompey" Elliott whose death in 1931 was a war-related suicide. His sad demise had a great deal to do with the disaster of Fromelles.

A Roll of Honour of the 57th Battalion members killed in the Great War completes this highly acclaimed book.