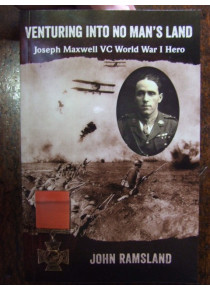 Venturing into No Man's Land Ramsland,

This is the history of Lieut. Joseph "Darkie" Maxwell VC DCM, MC and Bar, who was the second highest decorated Australian soldier of the First World War. Local historian John Ramsland, has retraced Maxwell's life from childhood on the Hunter coalfields until his death at age 71 in a soldier's settlement home in Matraville Sydney.

Around 90% of the book relates to Maxwell’s military life. Maxwell joined the AIF in February 1915 and was immediately allotted to the 18th Battalion, which was being raised in Sydney at the time. He later said his reason for joining was the,“6 shillings a day being paid to a digger compared to the 8 shillings a week he was getting as an apprentice”. He landed with the 18th Battalion on Gallipoli and served until he was evacuated on the 2 December 1915 suffering from jaundice. He fought at the Battle of Pozieres but it was at Westhoek Ridge during the 3rd Battle of Ypres that he distinguished himself earning the Distinguished Conduct Medal. He was commissioned on the 19th September 1917 as a Second Lieutenant. While scouting a patrol east of Ploegsteert near Messines he was again recognised for his gallantry, this time being awarded the Military Cross medal. In August 1918, at the Battle of Amiens he earned a bar to his Military Cross.

On 3rd October 1918, he was with the 18th Battalion when it was attacking the Hindenburg Line along the Beaurevoir-Fonsomme front. It was here that Maxwell performed the acts for which he was awarded the VC. The citation read: 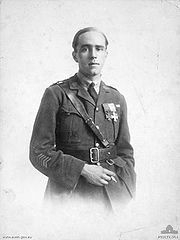 Lt. Joseph Maxwell, M.C., D.C.M., 18th Bn., A.I.F. For most conspicuous bravery and leadership in attack on the Beaurevoir-Fonsomme line near Estates, North of St. Quentin, on the 3rd October, 1918. His company commander was severely wounded early in the advance, and Lt. Maxwell at once took charge. The enemy wire when reached under intense fire was found to be exceptionally strong and closely supported by machine guns, whereupon Lt. Maxwell pushed forward single-handed through the wire and captured the most dangerous gun, killing three and capturing four enemy. He thus enabled his company to penetrate the wire and reach the objective. Later, he again dashed forward and silenced, single-handed, a gun which was holding up a flank company. Subsequently, when with two men only he attempted to capture a strong party of the enemy, he handled a most involved situation very skilfully, and it was due to his resource that he and his comrades escaped. Throughout the day Lt. Maxwell set a high example of personal bravery, coupled with excellent judgment and quick decision.

After the war Maxwell wrote of his war experiences in the popular book titled Hells Bells and Mademoiselles he was also a contributor to the diggers newspaper called Revielle.