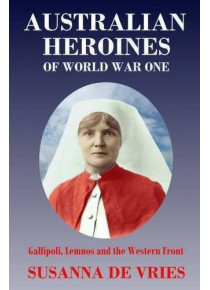 Australian Heroines of World War One﻿ by Susanna de Vries﻿

These are the real life stories of eight courageous women told through their letters, secret diaries, maps and original photographs; Australia’s first women war correspondent and her daring escape from the Germans and seven army nurses from every Australian State including Queensland's Grace Wilson. This young attractive matron whose nursing staff were devoted to her was ordered to set up a hospital for Gallipoli casualties on Lemnos Island. When Grace and her nurses arrived on the island they found that a War Office blunder had sent all medical supplies, tents and bedding to Egypt. There were no sanitary arrangements and very little drinking water but Grace was an inspiring leader and the 'hospital from hell' only lost 2% of its patients.

These women had the courage of the Anzacs they nursed and the compassion that women bring to war. Fascinating war diaries published are of nurses Hilda Samsing and Muriel Wakeford serving on a hospital ship between Anzac Cove and Alexandria who reveal the truth about the bungled evacuation of the wounded from Gallipoli with an introduction by Major General John Pearn of the Australian Army Medical Reserve.
This History would be interesting for anyone researching or to read more about the life, times and conditions surrounding the Anzac Girls.﻿
Click to see Author's website﻿