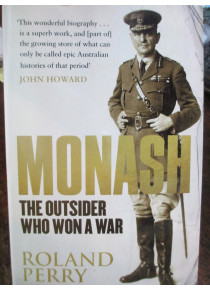 Monash The Outsider Who Won A War by Roland Perry

Monash: The Outsider Who Won A War by Roland Perry

His obsessional, brilliant planning, coupled with a ruthless streak, caused him to break the German army in a succession of battles that led to the end of the Great War.Author Roland Perry brings to life the fascinating story of the man whom many have judged as the greatest-ever Australian.
Monash: The Outsider Who Won A War draws on the subject's comprehensive letter and diary archive - one of the largest in Australia's history. The result is a riveting portrait that reaches to the heart of the true Monash character. It weaves together the many strands of his life as a family man, student, engineer, businessman, lawyer, renaissance man, teacher, soldier, leader, romantic and lover of the arts.﻿
Also see DVD Monash