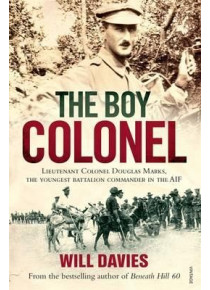 The Boy Colonel by Will Davies : new book

Known as The Boy Colonel, Lieutenant Colonel Douglas Marks, was the youngest battalion commander in the AIF and highly regarded not only as a future military commander, but as a business and community leader.
It was a blustery day on the 25th January 1920 at Palm Beach to the north of Sydney and the surf was wild. Two attempts had already been made to save a young woman caught in an undertow and dragged out when a young man; skinny, gangly and frail and known to be a poor swimmer, threw off his coat and shoes and raced into the surf. As his fiancée and young nephew watched, the sea closed over him and he disappeared. His body was never recovered. This was the sad and tragic fate of a gallant, highly decorated and promising young man named Douglas Gray Marks. And it was a great loss to a nation whose manhood had been decimated and where the pain of the war remained evident and raw.
Douglas Marks was born in 1895 and educated at Fort Street High School. He had, like so many enthusiastic and patriotic young men, basic military training when he turned up at the drill hall in Rozelle two days after the declaration of war. Before embarking in November 1914, he had received his commission as a Second Lieutenant in the AIF. After a period of training in Egypt, he embarked for the Gallipoli peninsula and landed on the second day. Spending a great deal of time in the dangerous frontline trenches at Quinn's Post where he was wounded, he remained on Gallipoli until the evacuation in December of that year. Just twenty years old, he was seen as an inspirational young officer, promoted to captain and given acting command of his battalion.

Marks then travelled back to Egypt, saw the re-organisation of his beloved 13th Battalion and the raising of its sister battalion, the 45th. Sailing from Alexandria, he crossed the Mediterranean to Marseilles and took the train to the north of France and the nursery areas around Armentieres and Bois Grenier.
From here, Douglas Marks found himself in the worst battles that the AIF were to fight in: Pozieres and Moquet Farm, Flers, Gueudecourt, Stormy Trench and Bullecourt on the Somme. He then travelled north and was part of the horrendous battles around Ypres in Flanders in 1917: Messines, Polygon Wood, Hollebeke and Passchendaele. Back on the Somme in early 1918, he fought at Villers Bretonneux, Le Hamel, the Battle of Amiens from the 8th August and in the fighting through to the withdrawal of his battalion in September 1918.
By this time he had been wounded a number of times, was promoted to Lieutenant Colonel, was the commander of his battalion and had been decorated with a Military Cross, a Distinguished Service Order, the Serbian Order of the White Eagle and had been mentioned in despatches. He returned to Australia and to civilian life in late 1918. In 1919 he became engaged to 'Queenie' and in January 1920, took that fateful journey to Palm Beach. Though we do not know what happened to 'Queenie', his distraught mother never came out of her house again.