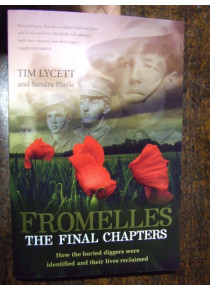 Fromelles the Final Chapters How Missing Diggers were ID

A book about how the Lost Diggers of Fromelles were identified and their lives reclaimed. On 19 July 1916, in the northern French village of Fromelles, Australia suffered its worst-ever military defeat when a British officer ordered 15,000 of our best and bravest to go over the top and attack the German lines.

Eight hours later, more than 5500 Diggers lay dead or wounded: the equivalent of all Australian casualties from the Boer, Korean and Vietnam wars combined. In addition, some 400 of our boys were taken prisoner, but almost 200 vanished and many remain missing to this day. This is the story how some of those Australian missing soldiers were identified from the Pheasant Wood burial site.