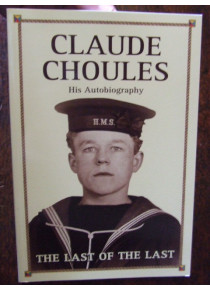 Claude Stanley Choules (3 March 1901 – 5 May 2011) was the last World War I combat veteran, and was the last military witness to the scuttling of the German fleet in Scapa Flow. He was also the last veteran to have served in both World Wars, and the last seaman from the First World War. At the time of his death, he was also the third oldest verified military veteran in the world and the oldest known living man in Australia.He was the seventh-oldest living man in the world. Choules became the oldest man born in the United Kingdom following the death of Stanley Lucas on 21 June 2010. Choules died in Perth, Western Australia, at the age of 110.He had been the oldest British-born man; following his death, that honour went to the Reverend Reginald Dean (1902–2013). In December 2011, the landing ship HMAS Choules was named after him, only the second Australian Navy vessel named after a sailor.

Born in March 1901, just a few weeks after the death of Queen Victoria, Claude grew up mucking about in boats on the river Avon, Worcestershire. His otherwise idyllic childhood was clouded by the departure of his mother when he was five. Claude commenced naval training near Southampton in 1915, joined the Grand Fleet in 1917 and, later that year, saw action aboard HMS Revenge in the North Sea. He was still on the Revenge when that ship participated in the surrender of the German High Seas Fleet in November 1918. He also witnessed what is sometimes said to be the last hostile act of WW I – the German scuttling of their fleet at Scapa Flow on 21 June 1919. After marching in the London Peace Celebrations, Claude saw duty as a peace-keeper in the strife-torn Black Sea region. As he cryptically remarks: “Many men in the Navy saw more death and desolation in 1919 and 1920 than they had seen in four years of major war.” In early 1926 Claude was part of a group of Royal Navy instructors seconded to the Royal Australian Navy. Although the first thing he was asked to do on arrival was to fight bushfires, which “scared the daylights” out of him, Claude liked Australia and took the opportunity to transfer to the Australian Navy. On the voyage to Australia he had met another migrant, Ethel Wildgoose. At the end of 1926 they were married in Melbourne. Returning to Britain in the service of the RAN, Claude become a member of the commissioning crew of HMAS Canberra. He describes her as “a very happy and comfortable ship”, in which he later circumnavigated Australia. In the early 1930s Claude settled with his young family at Fremantle, Western Australia’s principal port. His role as a torpedo and explosive instructor at the naval depot might have been a relatively quiet life in peacetime, but the coming of WW II thrust Claude into some of the most dangerous and demanding work of his long career. With the entry of Japan into the war, Fremantle became a major base for Australian, American and Dutch naval operations. Claude was responsible for much of the maintenance of the torpedoes, depth charges, mines and mine detection equipment of these vessels. He also participated in the training and arming of the now famous (but then top secret) Commando Group, Z Force. When the Japanese sank a fleet of flying boats at their moorings in Broome, it was Chief Petty Officer Choules who was sent north to clear the harbor by blowing up the wrecks. Had Fremantle been attacked, he had the shipping and the port’s major facilities mined and wired — ready to blow up. It was his job, too, to “de-louse” or otherwise dispose of the various stray mines and depth charges that washed up on Western Australia’s extensive coast. After his retirement from the navy in 1956, Claude and Ethel bought a block of land right on the beach at Safety Bay, south of Perth, and went cray-fishing for ten years. Surrounded by their children and grandchildren, the active old couple taught new generations the pleasures of mucking about in boats, of rescuing oil-smeared penguin chicks, and of just observing the infinite variety of the natural world. With his characteristic wry humor, Claude may credit cod liver oil as the secret of his longevity, or he may advise his questioner to “keep breathing”, but, at heart, he really believes that a loved and loving family kept him going. When Ethel died at the age of 98 in 2003, she and Claude had been married for more than 76 years. Written when he was in his early eighties (as a member of Elizabeth Jolley’s Creative Writing class), Claude’s memoirs were originally intended for his family. But time and circumstances have given this engaging and historically significant manuscript a unique status. Now, in his one hundred and ninth year, Claude Choules has become the world’s oldest first-time published author. Covering the first two-thirds of the twentieth century, Claude’s biography takes us from the peace of Edwardian rural England, through war, troubled peace, another war and finally the peace of living and working at the aptly named “Safety Bay”.

An interesting account of the 'LAST OF THE LAST' Active Servicemen of WW1'.