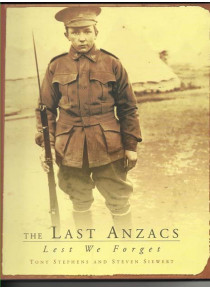 The Last Anzacs Book Lest We Forget

'The LAST ANZACS Lest We Forget' by T Stephens and S Siewert. ﻿

This military book celebrates the life of the Last Anzacs that were still alive in 1996.

'The LAST ANZACS Lest We Forget' book by T Stephens and S Siewert.
In 1915 more than 75000 Australians and New Zealanders went to war
on the Gallipoli Peninsula . They shared a horror, but their courage
and deeds on a battlefield of tragic errors and unimaginable
suffering helped build a legend, the legend of the ANZAC . This book was originally
published in 1996 when 18 Gallipoli ANZACs were still alive. It was updated
to take into consideration the passing of the LAST ANZAC, Alec Campbell , and
now has the year span of each Last Anzac. Each man has a few pages written on
his remembered exploits of the war and his life's story after the war. Another
important attribute of this book is the wonderful photographs which illustrate
the difference between the young man in uniform and the old centenarian. As
a 1st AIF medal collector I found the men's stories gave valuable insight to
the men of that era. Ted Matthews was the last survivor of the Australians
to land at Gallipoli on 25 April 1915. All round excellent book - this is a must
have for the ANZAC medal researcher.﻿