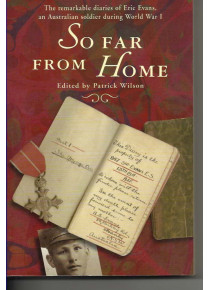 So 'So Far From Home' 13th Battalion Diary History

So Far From Home ' edited by P. Wilson .
Is the printed record of the remarkable diaries of 847 Eric S Evans 13th
Battalion AIF. This is a high text detail diary of life on the Western Front with the 13th . Eric Evans was among the first quota for the NSW 13th Battalion. He was a first day lander on Gallipoli. The next day the 26th April, Eric was badly wounded, one bullet passed through his thigh, another smashed his right heel. He was declared unfit for duty and was returned to Australia.

He started his diaries from Wednesday 17th February 1917. Mainly to relate (should anything happen to him) his life way from his girlfriend,  Dorothhy Wright.
It was for his sweetheart that he was writing the diary. They are not love stories, but extreme details of the day to day affairs influencing Eric and thus the operations of the 13th Battalion and individuals that made up that fine fighting Battalion. Many other individuals are mentioned thus making this book excellent for genealogy research.