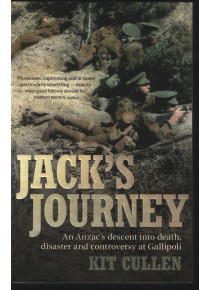 Jack's Journey An Anzac's Descent Into Death, Disaster And Controversy At Gallipoli by Kit Cullen

The diaries cover the voyage from Australia to training in Egypt and Lemnos and, finally, landing at Anzac. Unfortunately, the last diary ended as Jack entered the firing line on Bolton's Ridge at dusk on 25 April. He was wounded a week later. Where was Jack and what was he doing when he was wounded? What Kit discovered over ten years of painstaking research is extraordinary.

On 1 May Jack and about fifty other members of No. 15 Platoon 4th Battalion were ordered to go to the aid of about 60 Royal Marines who had been trapped for two and a half days in an isolated trench.﻿