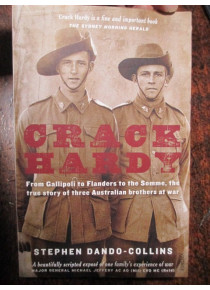 Around 20 years ago, the Author's family uncovered a dusty bundle of the Searle brothers WW1 letters. Later another extended family member found the full wartime diary of Viv Searle. Viv Searle was a first day lander with the 12th Battalion AIF onto the Gallipoli beaches at Anzac Cove. Viv's platoon under Lieutenant Rafferty were the men responsible for attacking the Turkish machine gun post at Fishermans Hut. This Turkish outpost were inficting terrible casualities on boatloads of 7th Battalion men trying land. This scene is well documented in the Official History. This is the true story of the Searle Brothers, Viv, Ray and Ned Searle. Of their WW1 experiences at Anzac and on the Western Front.

Destiny dealt a heavy blow on the Searle Brothers with only Ned surviving the war.