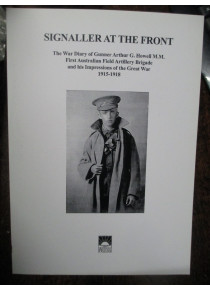 Signaller at the Front. The War Diary of Gunner Arthur G Howell

Signaller at the Front. The War Diary of Gunner Arthur
G Howell﻿

Signaller at the Front. The War Diary of Gunner Arthur
G Howell, MM First Australian Field Artillery Brigade and his Impressions of the
Great War 1915-1918' by Arthur G Howell MM editored by Dr John Coe. Howell served
with the 23rd Field Artillery Battery (FAB)1st A.I.F. for the most part as a signaller
(running messages between Brigade HQ and the front lines). He joined the FAB on
the 10/11/1915. He then went to France with the FAB where he was twice wounded.
He took part in the Battle of Pozieres and was awarded the Military Medal . Citation
reads,&quot; at Pozieres France from the 22 to 23 July 1916 Gnr Howell was stationed
at 1st Infantry Brigade HQ on the evening of 22nd July and the following day.
After trying all ways of communication with HQ, messages had to be sent by runners.
Gnr Howell was sent out several times and brought messages down safely under heavy
shell fire. His way for the most part being along open roads without any cover.&quot;
During an attack on Passchendaele Ridge he was wounded when his dugout suffered
a direct hit by a shell. He was once again wounded suffering the effects of gas
shells on the 16/10/1917. This book is a direct print of Howell's diary. His diary
includes extremely detailed descriptions of training the assault battles and the
use of tanks. Excellent reference to location, units mentioned , soldiers named
(see sample text below).<br> This book is a professionally produced reprint of
Howell's diary history.﻿