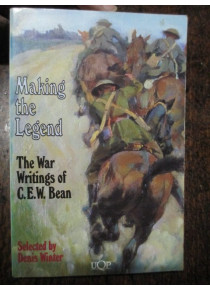 Making the Legend The War Writings of CEW BEAN ' by D. Winter

1992 ' Making the Legend The War Writings of CEW BEAN ' by D. Winter . The author is a world acknowledged World War One historian he has a deep admiration for Charles Bean. In this book he selected what he considered was the most important writing of CEW Bean. Winter chronologically investigates each one of the major battles that Australians fought. Adding what he considers to be Bean's most important writing on the Battle from all sources