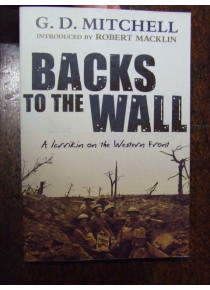 Backs to the Wall by G.D. Mitchell DCM MC

Originally published in 1937 (and long out of print), this is a gripping, first hand account of a young soldier's experiences in France and Belgium during the First World War.

George Deane Mitchell (1894-1961), soldier, author, politician and lifelong larrikin, was born on 30 August 1894 at Caltowie, South Australia, one of five children of George Deane Mitchell, railway porter, and his wife Annie, née Smith. Young George was a clerk in Adelaide when he enlisted in the 10th Battalion, Australian Imperial Force, on 5 September 1914. He served at Gallipoli from 25 April 1915 until he was evacuated with enteric fever on 6 August. Rejoining his battalion on 9 September 1916 in Belgium, he was transferred to the 48th Battalion on 31 October and promoted lance corporal on 17 March 1917.

On 11 April, after six hours of bitter trench fighting in the first battle of Bullecourt, France, Mitch covered his comrades' retreat, then shouldered his Lewis gun and strolled through heavy enemy fire to his lines. He won the Distinguished Conduct Medal and was promoted second lieutenant. His walk entered A.I.F. legend, and Charles Bean's official history used it to characterize Mitchell's brigade in the battle. On 28 March 1918 Mitchell's platoon held an exposed hillside at Dernancourt. On his right the enemy broke through. He ran to the break, waving a pistol, and captured about thirty soldiers. He was awarded the Military Cross. In May 1919 he returned to Australia an A.I.F. rarity, having survived four years of front-line service unwounded.

Mitchell wrote the A.I.F.'s most evocative diary, with a knack of seeing significance in events. 'We had come from the New World for the conquest of the Old', he observed at the Anzac landing. 'They all bore the hall mark of the Cog', he remarked of Londoners in 1916. 'I feel that I have lost touch with any life but this one of war', he wrote in 1917, it 'is hard to recall Australia, and apart from my people nothing stands out vividly. I feel an outsider. We are lost in the magnitude of our task'.

In peace he could not settle. In South Australia until 1922, he grew potatoes and was an army area officer at Mount Gambier; in Victoria until 1926 and Queensland until about 1936, he worked as an estate agent, garage-owner and motorcar salesman; and in New South Wales until 1940, he was a journalist and author. Although Mitchell was a Militia officer in 1920-26, he never liked officers, but he was proud of his war service and from 1934 wrote about it for Reveille, then for Smith's Weekly and in a book, Backs to the Wall (Sydney, 1937).