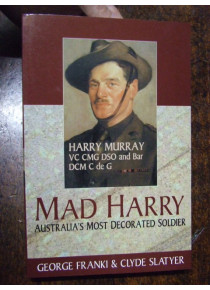 This war book is a detailed study of Australia's most decorated soldier, Harry Murray.

Murray's ancestors, were early settlers of northern Tasmania. In 1908, Murray was forced to leave the struggling family farm and sought work in Western Australia. At the outbreak of war in 1914, he was cutting railway sleepers in the karri forests of the south-west when he enlisted in the Australian Imperial Force (AIF) as a private soldier in the 16th Battalion.

At the end of the war, in 1918, he commanded a machine gun battalion as a Lieutenant Colonel and had been awarded six decorations, including the coveted Victoria Cross .
Harry won his VC for his action at Stormy Trench he had previously transferred to the 13th Battalion AIF. Bean wrote, ' Murray flung himself into the most famous fight for his life.His presence always raised other men to heights of valour.'
Known admiringly throughout the AIF as 'Mad Harry' because of his
fearlessness while patroling in No-Mans-Land and his ferocity in hand-to-hand fighting.
Murray was far from 'mad'. He planned attacks and trained his men with great care and always sought to avoid casualties.

After the war, Murray led a secluded life on sheep stations in the Queensland bush.
He rarely attended Anzac Day services or unit reunions, avoided publicity. and protected his privacy.
Little has been known about him.
The authors received much help from Murray's family
when writing this book and many details of the life and character of Australia's most decorated fighting soldier are revealed for the first time.

According to Bean, Harry Murray's best mate, Percy Black was the "greatest fighting soldier in the AIF". Percy Black was killed in action at Bullecourt while fighting to capture the Hindenburg Lines support trench. Of Course, both were mates of the Great Albert Jacka VC MC & Bar as all were members of the 4th Brigade AIF.
Click to see Book about Harry Murray and Percy Black