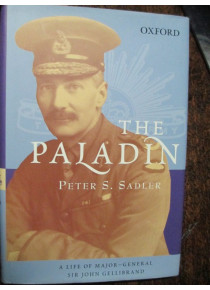 Gellibrand was present at the Gallipoli landing at Anzac Cove on 25 April 1915.
Gelliband had difficult relations with Bridges who over looked him in several Administrative rolls.

Gelliband﻿ was wounded twice at Gallipoli and suffered from typhoid. He was awarded the DSO (Distinguished Service Order).  On 4 December 1915, he was given command of the 12th Battalion but did not return to the Peninsular. Latter being promoted was given the command of the 6th Brigade.

The 6th Brigade sailed for the Western Front in March 1916.  Gellibrand was wounded by artillery in May and did not return to his Brigade until June 1916.

In  March 1917 Gellibrand was commander of the 2nd Division. He was awarded a bar to his DSO. Birdwood granted Gellibrand’s request that he be relieved of command and from there he spent some time in England in administration work, which was so appreciated that he was awarded the Companion of the Order of the Bath.

In November he returned to the Western Front and on 1 June 1918 was promoted to Major General, replacing Major General John Monash, who was in command of the 3rd Division. ﻿