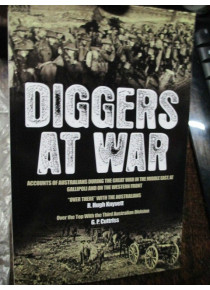 ' Diggers At War ' combination book of two Australian WW1 books / accounts .
This is a newly printed copy of the following books:

Over There With The Australians by Captain R Hugh Knyvett
R. HUGH KNYVETT was a Scout (Private 14th Reinf 7th Battalion), he arrived in Egypt too late for the Gallipoli Campaign but in time for the AIF enlargement in early 1916, he was transferred to the 57th Battalion, later he was commissioned and then become an INTELLIGENCE OFFICER with 59th Battalion AIF.

He was with the Battalion at Fromelles and during the Somme advance to the Hindenburg Line in latter part 1916. On the 20th November 1916 near Bapaume he received severe bomb wounds to his lower limbs (read page pic above). He recovered and returned to Australia. He had a paralyzed leg but not long after leaving Caulfield Hospital Melbourne his leg become better. He married and was on his way back to France via USA. Exactly what happened was not revealed but he succumbed to his wounds in the USA and died during 1918. A rare first hand account from an Australian scout. I believe that Knyvett wrote the book during his long hospital stay and it was published in 1918.
Even though he was not at Gallipoli he has a few chapters about the Landing and Evacuation.