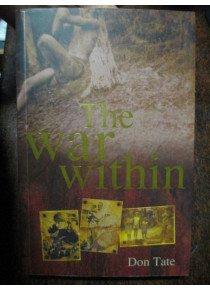 The War Within By Don Tate Australian Vietnam War Veteran

The War Within by D Tate

- "...a moving and disturbingly honest memoir....a brutal insight into soldiers at war.....this book will not be easily forgotten. It deserves a place alongside the classics…" - The Herald-Sun

"..a book for every Australian...brilliantly written…a tragic account of a soldier who struggles to survive in a constant storm of government stupidity, neglect, and indifference, declares war, and fights back to seek justice and recognition for himself and his comrades.." - Brigadier George Mansford (Rtd) AM

- "...a knock 'em out, drag 'em out type of book, permeated with anger (but) there is a richness and a vibrance in Tate's writing style...the reader grows with the author as he struggles through, and with, life....quite a remarkable man, a raucous Australian." - Brigadier Neil Weekes (Rtd) AM MC

- "...scales new heights in war writing...a dark and shocking journey where no subject is taboo..." - Ian McPhedran, The Daily Telegraph

- "..a brutally honest insight into a life less fortunate....takes the reader on a dark and shocking journey...." - The Courier-Mail

- "'The War Within' is an extraordinary memoir, an unabashed account of one raucous Australian life...." - Paul Ham, international journalist and author

- "...narrated with vivid authority, (it) at once disarms, repels, gives hope, as its narrator summons inner demons beyond anything that the war in Vietnam had made." - The Sydney Morning Herald