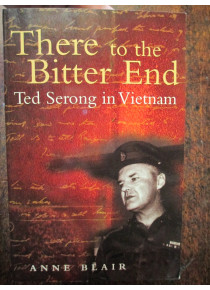 There to the Bitter End Ted Serong in Vietnam War

There To The Bitter End: Ted Serong in Vietnam By A Blair

Francis Philip (Ted) Serong was an Australian Army officer from World War II until his retirement in 1968. During his later career with the Australian Army as a member of AATTV in Vietnam , he found the CIA and U.S. think tanks a more congenial environment, especially after he lost his patron, Lieutenant General R. G. Pollard.﻿

During the war, the CIA and the Pentagon invited Ted Serong, an Australian soldier, to advise them on the conduct of the war in Vietnam. This is Ted Serong's story of that war. Serong grew to have influence at the highest levels of government in America and South Vietnam. Sponsored by the CIA, he turned a relatively minor assignment into the development of a program for the war against the North Vietnamese and the Viet Cong in particular, and for the world-wide struggle against Communism in general.

An adviser to Kennedy, Johnson, Nixon, Kissinger and presidents of South Vietnam, Ted Serong attended a multitude of secret planning meetings in Washington and Saigon. Throughout all this he kept a personal diary which he updated daily. This book is based on that diary and the accounts of many of the Australians, Americans and South Vietnamese who Serong worked and fought with. It brings to life the story of a secretive, mysterious man who was a central figure in the conduct of the war in Vietnam.﻿