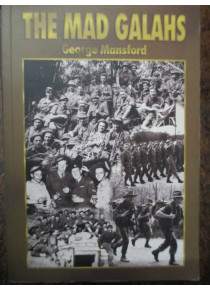 George Mansford enlisted in the Australian Army in 1951. He served 40 years as an infantryman; most of that time in the Royal Australian Regiment.

His service included Korea, the Malayan Emergency, Thai Border, Vietnam, New Guinea and Singapore. He was commissioned from the ranks in 1964 and retired as a Brigadier. He was a member of AATTV during the Vietnam War 1966-67.

He raised and commanded the Army’s Battle School (which is now used by foreign military units including USA, and UK); 11 Infantry Brigade; and the Reconnaissance and Surveillance Force in Far North Queensland.

George was made a Member of the Order of Australia in 1975 for outstanding services and retired in 1990 as a Brigadier.
He is the author of two books; “Junior Leadership on the Battlefield” and this best-selling novel, “The Mad Galahs” based on his military experiences.