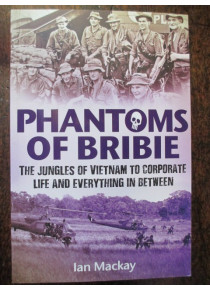 Phantoms of Bribie By I Mackay

The book title 'Phantoms a Bribie' comes from the name of an Australian Army operation called 'Operation Bribie' which took place on 17-18 February 1967 during the Vietnam War.
In 1967' 1st Australian Task Force consisted of 2 Battalions 6 and 5 RAR with supporting services﻿.
In the early hours of the morning of the 17th of February 1967 1st Australian Task Force was faced with an emergency when the Vietcong attacked the important fishing village of Lang Phuoc Hai which was situated 25 km by road from the task force base.

Operation Bribie would have 6 RAR with artillery and armored personnel carrier support attack this Vietcong force. 3 Companies﻿ were flown by helicopter to a landing zone. The lead platoon had only proceeded 100 m when heavy machine gun fire and sniper gunfire were being received.

A&B companies were selected for a frontal assault on the enemy.
B company was commanded by the author of this book Ian Mackay. Men of 6 Platoon B Company﻿ fixed bayonets and charged but was subsequently brought to a halt by further machine gun fire.
5 platoon under the command of John O'Halloran was then instructed to advance. O'Halloran later said," On my order to assault, the platoon as one arose and ran forward yelling and screaming."

Lance Corporal Kerry Rooney MID from Red Hill Qld led his section directly at the machine gun. At one point he fell to his knee to throw grenades. Rising he charged once more at the gun but was shot dead almost at its barrel."﻿

The Phantoms of Bribie is a highly readable blend of an engaging yarn and a fascinating portrayal of operational service in Vietnam as an infantry company commander, leading some 100 fine young national service and regular soldiers in close quarter jungle fighting.

Ian's training within the SAS and operational service in Malaya served him well in Vietnam where he was a company commander of Bravo Company 6 RAR. During Operation Bribie he lead his outnumbered company’s desperate bayonet charge, followed by close quarter fighting, against a well dug in and determined enemy. This action sharply illustrated the courage, the battle discipline and the spirit of the well trained Australian combat infantryman.

On leaving the Army, Ian excelled in the Australian and international business worlds.  A multi-talented sportsman, Rugby Union remained his passion, in which he performed to international level. Ian outlines the difference between leadership and management using many interesting and often humorous examples. Both qualities are vital for successful senior operatives in both civilian and military organisations. Most importantly, as Ian explains, a good leader must also be an effective decision maker and a good communicator.