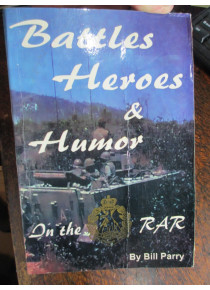 Battle Heroes and Humor In The RAR Korea Vietnam Book

Battle Heroes and Humor In The RAR by Bill Parry

This book is packed full of rare veteran stories about Royal Australian Regiment operations in the Malaysia and Indonesian confrontation, Korean War and Vietnam War. Of immense interest to Veterans but also to Family History researching RAR in Vietnam and Korean War.﻿

Importantly, there is also a 'nominal roll' of 3RAR from the Manning chart of those who were in Korea and on the postage strength of the Battalion from the 22nd to 24 April 1951.﻿