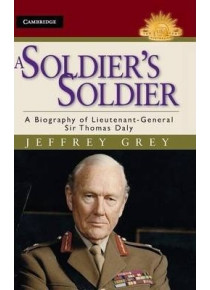 Lieutenant General Sir Thomas Daly was a renowned soldier and one of the most influential figures in Australia's military history.

As Chief of the General Staff during the Vietnam War, he oversaw a significant re-organisation of the Army as he fought a war under political and resource restrictions.

In this unique biography, Jeffrey Grey shows how Daly prepared himself for the challenges of command in a time of great political upheaval. A

Soldier's Soldier examines Daly's career from his entry to Duntroon in the early 1930s until his retirement forty years later, covering the key issues in the development of the Australian Army along the way.

Drawing on extensive interview transcripts, the book provides a compelling portrait of Sir Thomas Daly and his distinguished career.﻿