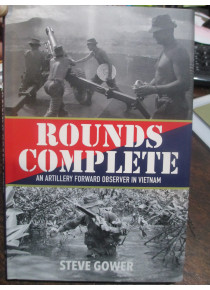 Recollections of Steve Gower's 1966 "tour" in Vietnam as a young gunnery captain in the 101st Field Battery.

He served in the dangerous role of a forward observer with the 5th and 6th Battalions of the Royal Australian Regiment. The author Steve Gower maybe better known to people as the Director of the Australian War Memorial from March 1996 – December 2012 retiring after 16 years .