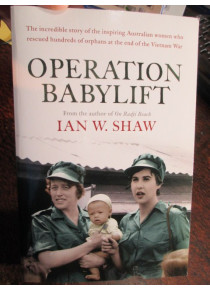 Operation Babylift by I W Shaw

Operation Babylift by I W Shaw﻿

Based on extensive archival and historical research, and interviews of some of those directly involved in the events described, Operation Babylift details the last month of the Vietnam War from the perspective of the most vulnerable victims of that war: the orphans it created.

Through the story of the attempt to save 600 children, we see how a small group of determined women refused to play political games as they tried to remake the lives of a forgotten generation, one child at a time. ﻿