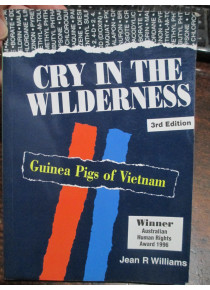 The author's son is a Australian Vietnam War veteran. At the time of the war, she took part in the 'Cry For Peace' and marches. In this book she opens up the Pandora's box on what happened during Operation Ranch Hand.

As the sub title of the book eludes the author considers that the soldiers serving in Vietnam were treated like guinea pigs during the disbursement of Agent Orange and other chemicals.  Many diggers especially those operating in CORPS III patrol area were basically being poisoning. Just over 500 Australians were killed in action Vietnam War. Of those who returned, to the date of printing, 280 Vietnam veterans have officially been recognised as having committed suicide.

This is a comprehensive account of the Agent Orange controversy, the struggle of the Vietnam Veterans Association for a royal commission into the poisoning of diggers.