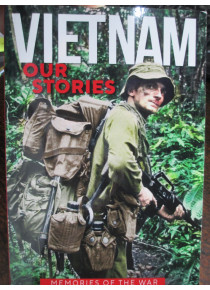 Vietnam Our Stories by K Childs and K Foster

It was the war that defined a generation. Vietnam: Our Stories tells the history of the Vietnam War through the eyes of the men and women who relive their service with these priceless testimonies.﻿

A tribute from the Australians who served on the battlefield.
Their stories compiled by Kevin Childs and Ken Foster.

The co-editor Ken Foster, arrived at Vung Tau, South Vietnam on HMAS Sydney on 3 February 1968. He was posted to HQ Australian Force Vietnam in Saigon and Transport (DADST). In May 1968, he was seconded to the Australian Task Force Forward Maintenance Area at Fire Support Base Coral and remained there until the final road withdrawal of the Fire Support base. ﻿

The stories include,
Silence of a Grenade by Ian Felton AATTV
Persevere by Laurence Nicholson AATTV
Christmas Eve Vung Tau by Alan White RAAF
Mansions and Tunnels by Brian McFarlane 6RAR Long Phuoc
When I was Only 19 by Rex Fisher POGO 110 Sig Sqn
Back From The Dead by Sgt Dave Morley 6RAR
A Policeman's Lot by Ray Bate RAAPC
A Burrowed Jeep Brings Trouble by Rod Edwards RAAF
Emus that went to War by Ray Godfrey RANHV door gunners
Firefights and a Fragging by Jed Hart RAN Huey Pilot
The Finest Support Ever Witnessed by This Unit
by Ray Godfrey RANHV
Bluebell Answers the Bugle Call by Des Kearton Centuron Tanks ﻿
From Katunga to Coral by Bill Cantwell 1RAR
Chopper and Compers by Lachlan Irvine Coral Account
One Soldiers's War by Ian Cavanough Volunteer Nasho
Oh the Noise by Peter Robinson  RAAF crew 9 Sqn
Blackbirds Bourbon & Loss of a General  RAAF Blackbirds
many more ++