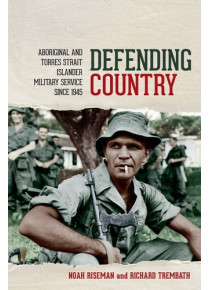 This book records the contribution of Indigenous people﻿ who have served in Australian Defence Forces since WW2 - from 1945 onwards to 2016 time of publication.

Based on a combination of archival research and oral history testimonies, Defending Country is a compelling account of the wartime experiences of Aboriginal and Torres Strait Islander servicemen and women.

It examines what motivated Indigenous people to serve, experiences in combat (i.e. Vietnam War ) and non-combat roles, interactions with non-Indigenous service personnel, work in the women's services (1951-85), racism in the armed forces, return to civilian life, the Returned and Services League's (RSL) relationship with Indigenous Australians and the role of the Australian Defence Force to promote Reconciliation. ﻿