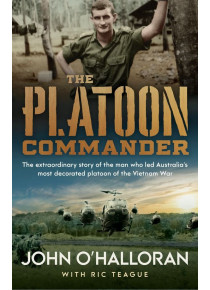 This is one soldier's extraordinary account of a war that still haunts Australia.

As a tough and determined 21-year-old, he guided 6 RAR's B Company 5 Platoon through Operation Hobart and the Battle of Long Tan. However, for his platoon, their toughest military challenge was on Operation Bribie, where he lead a fixed bayonet charge against a deadly Viet Cong jungle stronghold.

The Platoon Commander is an unmissable and devastating first-hand account of the realities and brutalities of war. A war that was fought in jungles, not trenches, which would bitterly divide Australians. O'Halloran's sense of duty and strong character carried him and his men through fierce battles and uncertainty. His sense of humour kept him going through the years afterwards. His indomitable spirit inspired the men of 5 Platoon to fight against the odds to achieve the mission - no matter how treacherous - and even away from the action and in the many years since O'Halloran kept the respect of his men.

Now regarded by many of his peers as a national treasure, John Patrick Joseph O'Halloran has been quoted in almost every important book written about Australia's involvement in the Vietnam War, yet has never told his own remarkable story. Until now.