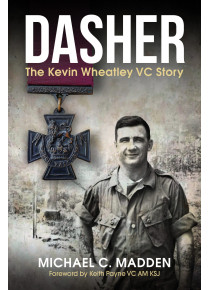 Warrant Officer Kevin Arthur "Dasher" Wheatley VC SS (awarded the Silver Star USA Gallantry) Knight of the National Order of Vietnam, enlisted in the Australian Regular Army in 1956. He served in Malaya with 3rd Battalion, The Royal Australian Regiment from 1957 to 1959 and then with 2nd and 1st Battalions of the Regiment until 1965 when he was posted to the Australian Army Training Team Vietnam (AATTV). His Victoria Cross citation reads, "Warrant Officer Wheatley displayed magnificent courage in the face of an overwhelming Viet Cong force which was later estimated at more than a company. He had the clear choice of abandoning a wounded comrade and saving himself by escaping through the dense timber or of staying with Warrant Officer Swanton and thereby facing certain death. He deliberately chose the latter course. His acts of heroism, determination and unflinching loyalty in the face of the enemy will always stand as examples of the true meaning of valour."

He is one of the most extraordinary characters in Australian history. Dasher was a husband, father, champion footballer and one of the finest soldiers this country has ever produced. The story of his sacrifice is used by the ADF as a perfect example of valour and mateship to this day. Although he is one of the most famous Victoria Cross recipients of all time, his story has never been fully told. Until now.