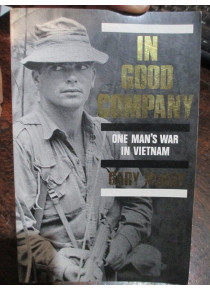 In Good Company Ones Man's War in Vietnam by G. Mckay

This Vietnam War book is a autobiographical account of McKay's conscription into military service , his training as an officer at the Officer Training Unit, Scheyville and his preparation for a tour of duty in South Vietnam as a rifle platoon commander. The book is based on the letters the author sent home to his wife and which chronicled his platoon’s actions during search and destroy operations in Phuoc Tuy Province. This is a grass roots account of what infantry soldiering is all about and includes all of the highs and lows that men in combat will experience at some time. A straightforward story of the fears and the camaraderie which soldiers experience in combat. Second Lieutenant McKay took part in some of the largest actions fought in Vietnam. By mid-1971 the Viet Cong’s Dong Nai Regiment (274 VC Main Force) and the 33rd NVA Regiment had infiltrated back into Phuoc Tuy Province just as the Australians were preparing to withdraw from the Vietnam War. The culmination of this gripping and highly readable account is the battle fought at Nui Le where McKay’s rifle platoon is heavily outnumbered and is engaged in a life and death struggle. For his actions during the battle at Nui Le, Gary McKay was awarded the Military Cross gallantry Medal. During the battle he was severely wounded and after evacuation back to Australia in October 1971, spent almost 12 months in hospital.