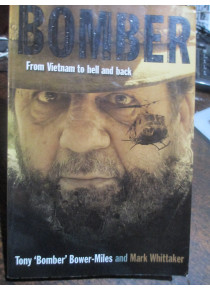 Bomber From Vietnam to Hell and Back - Tunnel Rat & Sapper

Tony "Bomber" "BM" Bower-Miles was a young sapper and 'tunnel rat' in the Australian Army when he first went to Vietnam in the late 1960s. Serving with 3 Troop 1 Field Squadron RAE his Vietnam War experiences are fully covered in this book.

Land mines were one of the biggest threats faced by troops on both sides, and much of Bomber's work involved laying or clearing these terrible devices. He saw mates and colleagues killed and horribly injured around him, in a war that was confusing, terrifying and devastating to everyone that it touched.

He returned to Australia scarred, battered and unable to relate to a peacetime world. Alcohol became his way of escaping, and his life spiralled down into addiction and violence. He could easily have been lost – another veteran unable to cope, another grim statistic put down to the tragedy of Vietnam.

But Bomber wasn't ready to let the war beat him after all these years. In 2001, he returned to South East Asia, putting his old skills to work in the dangerous job of clearing the millions of forgotten land mines that litter Cambodia. Starting from scratch, with makeshift equipment, Bomber established the Vietnam Veterans' Mine Clearing Team, an NGO with a difference – as those who fought now help others still suffering the consequences of the conflict.

Bomber is his story. Tough and uncompromising, it reveals the true face of war in all its brutality. But it also tells of redemption and humanity: a tale of real Australian heroism.