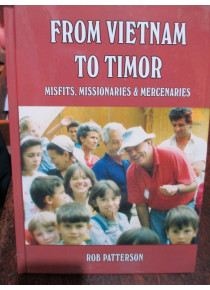 FROM VIETNAM TO TIMOR MISFITS, MISSIONARIES AND MERCENARIES by R. PATTERSON : new book

Rob Patterson was born in 1946, in Ararat, a town, in the western region of Victoria. During the post-war period of the 1950s, he moved from place to place, depending on his father's employment. The family eventually settled in Wodonga in 1956 having travelled over most of Victoria and parts of southern New South Wales. After completing his schooling in Albury, Rob left home and moved to Sydney where he found work with the Bank of New South Wales.

Two years later he was 'called up' for National Service, as part of the Government's conscription policy and undertook two years' army service. Liking the lifestyle Rob stayed with the Army to complete over 22 years of service, including a 1970-1 posting to South Viet Nam. In Vietnam he served with the Australian Logistics Support Group (1 ALSG) & 1 Australian Ordn Field Park (1 OFP). He left the Army as a major in 1989 and for a time worked in a commercial enterprise where he felt totally unsuited.

In 1993 he ventured into the world of Humanitarian Aid, working overseas in six different countries in the nine years that followed. Employed at different times by Care Australia and the United Nations, his tasks included helping to keep refugees and displaced people safe and try to rebuild their lives. His work has taken him to places as different as Kurdistan in northern Iraq after the First Gulf War, Bosnia, Croatia, Papua New Guinea, Soloman Islands and two periods in East Timor.