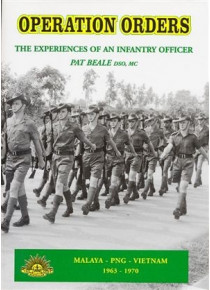 The author Pat Beale was the only Australian Major to be awarded the DSO medal during the Vietnam War. Early during the Vietnam War, as a member of AATTV Mike Force,  he commanded a half Battalion of Montagnard﻿s. French term Montagnard, meaning "People from the mountains" refers to an indigenous people group generally from the Central Highlands of Vietnam.﻿ A tough group of warriors who refused to take prisoners. Beale found it difficult to restain these soldiers from old tribe traditions of souveniring the ears from bodies of foe. He took part in the Battles at Dak Seang in Vietnam. Previous to Vietnam War, he was awarded the MC medal in Borneo during the Indonesian Confrontation in 1965 and saw operational service in Papua New Guinea. These Operations are covered in this book. After Vietnam he soldiered on for another 20 years the main highlight being the command of 1 RAR Townsville between 1978 and 1980. Prior to Peter Gosgrove taking Command in 1983.

This book gives a valuable insight into Australia's military involvement in South-East Asia and Papua New Guinea as experienced by an infantry officer. He was involved in anti-terrorist activities in Malaysia, action in Borneo during Confrontation and then in Vietnam with a Special Forces unit.

This is a wonderful evocative account of soldiering in what now seems to be  a bygone era, when one could spend years of peacetime and operational service in Malaysia, Papua New Guinea and Vietnam. It is all brought to life by an author with an eye for detail, beauty and humour. Once again I could almost smell the jungle paths and the tropical vegetation. Pat Beale has given us a valuable glimpse of the human face of soldiering and warfare. The human aspect has not changed substantially over the centuries, even though the context of warfare changes. It is the reality of war and combat that should never be forgotten."

Australian Army experiences in Malaya, Borneo and Vietnam in the 1960s sowed both good and bad seeds in the furrow of military professionalism that produced the Army of today. To a great extent, excelling in relatively small-scale jungle warfare at the tactical level with light forces became an end in itself. From the 1970s to the 1990s the Army’s protracted struggle, with mixed success, to re-equip itself intellectually, doctrinally and materially was in large part because it was so bogged down in its 1960s tactical-level successes.

I finished my time as a platoon commander in 1RAR only months before Pat Beale took command of the battalion in late 1978. My peers who remained to serve under him have always spoken highly of the experience. After reading Operation Orders I now have a deep understanding of the mentoring I missed from a man who obviously was rarely, if ever, incapable of seeing the bigger picture. Pat Beale’s book is the best intellectual and professional analysis of Australian infantry platoon and company leadership on operations I have read. As a general account of such sub-unit leadership it is at least on par with Jo Gullett’s Not As A Duty Only.

His experiences, which would be the envy of most young officers of the post-Vietnam period, are recounted with insight, modesty and humour, although few nowadays would share his relish at seven years as a platoon commander. The thematic rather than strictly chronological structure of the book adds to its utility and depth. Without squeezing, Beale’s book drips nuggets of commonsense, intellectual honesty and real insight.

His obvious respect and affection for the Aussie soldier, and all his abilities and foibles, shines throughout the book. His discussion of fear, both of battle and death, and the best way to manage them is succinct and reasoned. Beale’s ability to extrapolate experiences and derive principles is a gift. When discussing then secret cross-border operations in Borneo he observes: ‘In the long run, victory and indeed self-preservation, can only be assured by taking the fight to the enemy, a principle that applies as much in the realm of national security as it does at the tactical level on the battlefield’.

Beale’s views on the Army Reserve and the lessons to be learnt today from the failure to deploy formed reserve units to Vietnam are a refreshing contrast to many of his peers. His discussion of PNG unity, and the national and PNGDF development activities he undertook with 2PIR in the late 1960s, demonstrate a deep affection for, and understanding of, the people of PNG. His observations on special operations theory and training circa 1969, and their relative unsuitability for an Asian battlefield, resonate with similar practical dilemmas still faced today.

Beale’s accounts of his service commanding a battalion of Montagnards in the highlands of South Vietnam occupies much of the latter parts of the book. Much of it is moving as well as informative. His observations on combat stress and combat exhaustion, and the inadequacy of combat leadership based solely on what he calls the ‘two quaint schools of thought … the qualities approach … and … the inspirational one’ should be read by all sub-unit and unit leaders. By his own admission he stumbled on the functional approach to leadership via battlefield experience and instinct.

Finally, an earlier passage has considerable relevance when considering the force structuring problems the ADF faces today, particularly in an era when the phrase ‘professional military judgment’ is sneered at by many of the political class and the denizens of the Department of Defence. Beale recounts his pre-deployment training at Canungra before joining the Australian Army Training Team – Vietnam (ATTV) and notes:

I enjoyed the urgency and dynamism of the place and also the more-than-passing salute to its past. Much of the esprit of an army is bound up in such customs and traditions. I would shortly be going to a job [commanding a Strike Force Battalion of Montagnards] where I would be adrift from those traditions, except those I could carry in my mind or heart.

Till then tradition had unavoidably played a large part of my life. It underpins most activity of an army from its daily routine to the most splendid ceremonial. Some would discard tradition, disdaining the symbolism and its trappings. They contend that a modern army, fighting on a modern battlefield, cannot be encumbered by the past. On the other hand, there are those who cling to tradition as a shield against change, a prop for their prejudices and a crutch for their intellectual laziness.

These extremes are a nuisance: the hide-bound conservatism of the latter leads to attitudes of “Colonel Blimpism”, while those who abandon tradition in the name of modernity would deny the soldier an important element of his morale.

Hopefully an army can use its traditions positively, not as an anchor to the past nor an encumbrance on the present, but as a tool for the future.

When I graduated from Duntroon my father, a 2nd AIF veteran, gave me a copy of Not As A Duty Only. If my son or daughter was graduating from Duntroon this year or next, I would give them a copy of Operation Orders.

This review from the Defender magazine is reproduced by kind permission of the Australia Defence Association - www.ada.asn.au