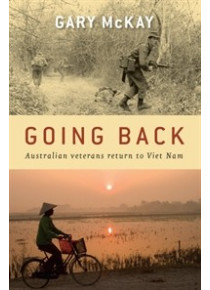 5RAR Vietnam Diggers ReturnIn this Vietnam war book Gary McKay returns to Viet Nam with a group of other 5RAR veterans to record their reactions when confronted by the past - and their former enemy. The text of the book is supported by before and after photos of the old base around Nui Dat and the R&R town Vung Tai. This book would be of high interest to Vietnam War researchers and  family historians of 5 RAR. Great book for someone who is traveling to Vietnam just follow the tour that the boys made - they explain what was happening at the location etc.

'What I thought I knew about the Viet Nam War didn't even come close to scratching the surface of what the Viet Nam experience really was all about for my father and his fellow veterans After going to Viet Nam with him, I felt I finally understood him a little better' - Kelly McKay
Going Back is a detailed and highly personal collection of the experiences of Australian Viet Nam War veterans as they journey back to the land where they once fought and lost their innocence. Veteran and author Gary McKay has travelled with and interviewed over thirty veterans, and their partners and families, who have returned to Viet Nam. Going Back records their strong and sometimes unexpected reactions to returning to a country that has in places changed beyond all recognition, and is elsewhere all too familiar. It also contains essential practical advice about travelling to Viet Nam.
An infantryman who was wounded in action and who lost several comrades during his tour of duty, Gary McKay has since travelled to Viet Nam several times on research trips for his many books on Australia's longest war. His personal experiences of going back, and those of his daughter, bring the harsh reality of returning to former battlefields onto the page for all to share.

Gary McKay served as a rifle platoon commander in Viet Nam and was awarded the Military Cross for gallantry. His time in Viet Nam was the basis for many of his best-selling books including In Good Company: One Man's War in Vietnam, Bullets, Beans and Bandages, Delta Four and his book with Bob Buick All Guts + No Glory. After 30 years military service, Gary retired from the army. He lives in Jervis Bay, NSW and currently works as a freelance historian and non-fiction writer.