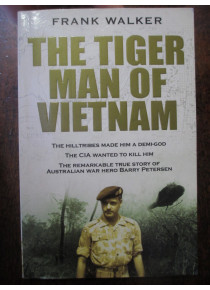 The Tiger Man of Vietnam by F Walker : new book

The Tiger Man of Vietnam

As he flew over South East Asia towards Vietnam, Captain Barry Petersen AATTV struggled to keep an aura of calm. Inwardly he was incredibly excited. Aged 28, highly trained, with experience in anti-communist guerilla warfare, he was about to embark on the biggest and most important mission of his life.

In 1963, Australian Army Captain Barry Petersen was sent to Vietnam as an adviser. It was one of the most tightly held secrets of the Vietnam War: long before combat troops set foot there and under the command of the CIA, Petersen was ordered to train and lead guerilla squads of Montagnard tribesmen against the Viet Cong in the remote Central Highlands. These were the early days of Australian Army participation in the Vietnam War.

Petersen successfully formed a fearsome militia, named 'Tiger Men'. A canny leader, he was courageous in battle, and his bravery saw him awarded the coveted Military Cross, and worshipped by the hill tribes. But his success created enemies, not just within the Viet Cong. Like Marlon Brando's character in 'Apocolyse Now', some in the CIA saw Petersen as having gone native. His refusal, when asked, to turn his Tiger Men into assassins as part of the notorious CIA Phoenix Program only strengthened that belief. The CIA strongly resented anyone who stood in their way. Some in the US intelligence were determined Petersen had to go and he was lucky to make it out of the mountains alive. THE TIGER MAN OF VIETNAM reveals the compelling true story of little-known Australian war hero Barry Petersen AATTV.