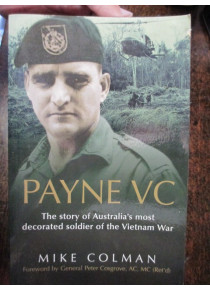 2009 ' Payne V.C. ' written by M. Colman. Follows the life of Australian soldier Keith Payne who won the highest award for valour the Victoria Cross . Payne not only fought in Vietnam for which action the VC was awarded but also saw action in Korea and was a veteran of Hill 355 1952.

Interesting point that Payne's VC was the last Imperial VC awarded to an Australian.